I posted a while ago talking about my intention to buy a new digital camera (as my old one was stolen/lost). I bit the bullet, when Amazon finally got it back in stock (most of the time, they seem to be out of stock, only offering it from third-party sellers, and then at one point they got it back in but it was $40 more, and then one day they had it back in at the $340-ish price!), and bought the Canon SD800 IS (and, of course, the accessory kit). Amazon was actually cheaper than Costco for the camera, but I bought two 2Gb SanDisk Ultra II SD cards for it from Costco, with an excellent coupon a while back.

Here (below) is one of the first photos I took with the SD800 IS (the lavendar), and a photo (link is to set thereof) of food taken (without flash, on macro, at night!) in a yakitori restaurant last night: 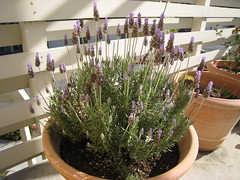 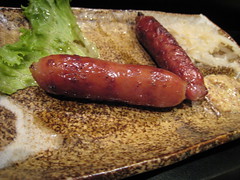 I also recently acquired (through a deal on eBay that was just too good to pass up; MSRP is $250) a Microvision Flic Bluetooth Barcode Scanner! :) This enables me to add things to Delicious Library without spending a lot of time trying to coax DL to recognise the barcode using my iMac's iSight camera. What's more, though, I take great amusement from the fact that the one I bought is actually rebranded by NCR! I bought a frickin' NCR product! How bizarre is that?! :) The NCR model also comes with a bluetooth radio base station which looks to be serial and I believe is for using is with NCR POS (point of sale) systems. :> 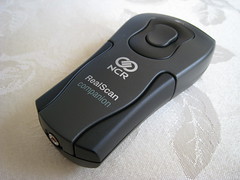 In less happy tech news, my new 80Gb iPod is having problems. When I plug it into my iMac, the iMac says it's corrupt! I eventually did the restore which wipes the iPod entirely and has to re-copy everything to it ... and that worked ... but then I plug it in again, and the same damn thing! Corrupt, according to the iMac! ARGH! Is this some horrendous bug in the new iTunes 7.1.1 or whatever its version number is ... or is the iPod really dying? :( It works fine other than when I try to sync it...