A while back I spent some time trying to find the best option for media (DVDs, etc.) storage. I wanted to store a lot of DVDs while taking up minimal wall space (width). I looked at all sorts of options, and nothing seemed satisfactory.

One of the nicest options was Leslie Dame's media shelving units with sliding glass doors. They don't come out too far into the room and your library is somewhat protected against dust (though the doors definitely don't make a seal) and against unplanned baby-driven media unshelving events.

I was initially, however, unsatisfied with the Leslie Dame (why do they not have a web site?!) sliding-glass-door media bookcases because they held fewer DVDs per inch of wall than my IKEA bookcases loaded with DVDs (I wanted to increase DVDs per inch, not decrease it). This is because they weren't tall enough to take advantage of the height of the room. I bemoaned how silly it was that these bookcases which were really efficient for storing DVDs in general failed at maximizing use of wall space by being quite low.

This immediately turned them into a very nice option.

They come in 3 colours, but frustratingly not all models are available in all colours from all retailers -- indeed, the local furniture store we ordered the floor-standing units from was *unable* to order the wall-hanging units (they simply do not appear in the catalogue they get to order from). We really liked the Dark Cherry option (it's a beautiful dark red colour), so we ordered two floor-standing MS-1050DC units from Hoot Judkins, aforementioned local furniture retail outlet, but alas must order the wall-hanging units from some random place in New York.

Thankfully Leslie Dame seems to pack their furniture REALLY well. The MS-1050DCs came in 2 boxes each, and each box was actually two boxes, one inside the other, with pieces of press-board protecting ends and edges between the boxes. This makes me more confident that ordering the MS-525DC units to be shipped to us from $random_internet_retailer will be ok. 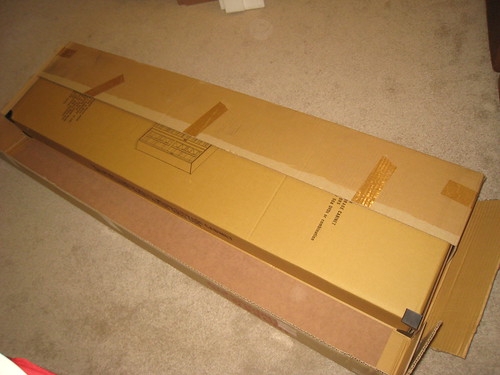 Outstandingly well packaged so they don't suffer in transit.

While we only have the floor-standing units so far, I've got some photos of them up on flickr. 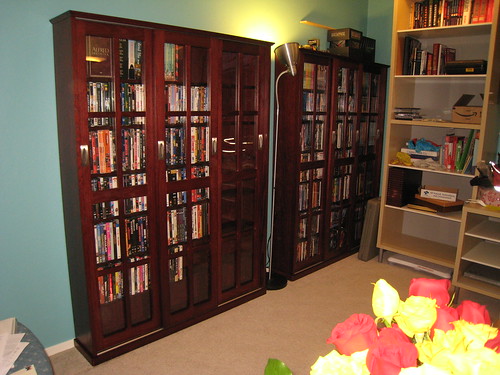